A Story About a Woodpecker that Just May Save Your Business

So, I was meditating the other day and I…what?

No. I don’t wear a robe or sit on the floor or any of that stuff.

It’s really not that big of a deal. Don’t get all weird about it, ok?

So, I was meditating the other day and I had this vision that I was…WHAT NOW?

Yes. I had a vision.

No. I don’t normally have a vision because my mind is usually racing around thinking about all of the things I have to do like write this blog post.

Can we please get past this so I can get to my point?

So, I was meditating the other day and I had this vision that I was overlooking the desert.

Along the desert floor were thousands of dead or dying animals. And not the wimpy kind either. There were lions, tigers, and elephants….oh my! (You knew that was coming.) Plus there were a few others that I can’t quite think of right now which doesn’t really matter because it’s irrelevant to the story.

Anyway, some of the animals were lying there motionless. Others were dead with their heads buried in the sand. And the rest were struggling to move as they were clearly about to take their final breath.

Meanwhile, somewhere in all of this was a bird pecking at a cactus.

I didn’t know this at the time because I’m not much of a bird guy (I used to have a love bird named Elvis growing up and he was kind of a jerk) but the bird was a Gila Woodpecker. And Gila Woodpeckers survive in the desert by pecking a hole in a cactus to get water and build a shelter for themselves.

Think about that for a second.

While all of those other powerful animals were either dead or dying, this little bird found a way to survive in these horrible conditions.

Now, don’t get me wrong. It wasn’t easy.

It took ingenuity. None of the other animals thought to look for water in a cactus let alone using it as a place to set up camp and actually live inside.

It took strength. Smacking your face against a cactus thousands of times in an effort to drill a hole in it big enough to live in takes some serious effort.

It took faith. There were no guarantees that there would be water inside the cactus. Yet, the Gila Woodpecker invested the time to find out. Without getting all caught up in the “what if’s” and the worst-case scenarios.

And it took bravery. One of those cactus needles to the face is all it would take for that little bird to join the rest of the animals that didn’t make it.

And yet, this little woodpecker took on the challenge and not only survived but thrived as a result while all of the other animals either buried their head in the sand or were just doing what they have always done. And as a result, they didn’t make it.

So, What Does All of This Have to Do With You?

We’re at a period in history where everything is changing and will continue to change. Even if this virus were to go away tomorrow, life and business will never be the same again. And so you need to start thinking differently.

Many of us are burying our heads in the sand or looking for solutions using outdated strategies that no longer work. If you want your business to make it to the other side of this whole thing bigger and better than before, you are going to have to approach it much differently.

It’s going to take ingenuity. What’s different now? Do people have the same problem they had before or has something changed? Or maybe the problem is the same but the solution you offer is different. Or maybe the way you structure your offer has to change to give people some peace of mind while they are going through an otherwise difficult time.

It’s going to take faith. None of us really know what life is going to look like a week from now let alone a year from now. So you are going to have to have some faith here. Don’t overthink it and don’t second guess yourself to a point where you are paralyzed. Do the research, make the decisions, put in the effort and have faith that it will get you where you need to go.

And it’s going to take bravery. Events like this will shake out the weak. There will be consolidations in some industries. Other industries will collapse. And there will even be some new industries created from it. Those who are on the front line and yell charge as they go screaming down the mountain will be the ones who are going to make it.

But when you tap into that ingenuity, strength, faith, and bravery you will find what you need in order to reinvent yourself while everyone else is stuck looking for something that no longer exists.

So, what is your cactus in all of this? 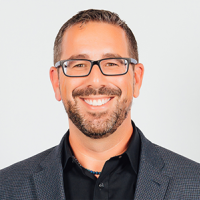